Miri – 20 December 2011 – It was a proud moment for Curtin University, Sarawak Malaysia (Curtin Sarawak) when it came in second in the recent national-level investment quiz organised by Permodalan Nasional Berhad (PNB).

It was Curtin Sarawak’s best showing in the annual quiz, bettering its fourth placing in the 2009 event. Representing the university were third-year students Lau Lik Wong and Ankith Rana, both doing an accounting and finance double major bachelor degree, and Lim Bee Yen, who is enrolled in the banking and finance stream of her undergraduate course.

The quiz has been organised by PNB, the government’s investment arm and Malaysia’s biggest fund management company, annually since 2001 as part of its corporate social responsibility efforts. It is aimed at promoting awareness and appreciation among university students of the merits of prudent investing.

33 universities took part in this year’s quiz, which was held in Penang.

The preliminary round of the quiz, consisting of a written test, was organised simultaneously across all the campuses of participating Malaysian private and public universities in October. The top three students from the preliminary round were chosen to represent their respective institutions in the final round held at Universiti Sains Malaysia, Penang from 11 to 12 December 2011.

All three students were obviously ecstatic about their achievement, saying that it was a result of the great teamwork they had.

“We came to the conclusion that none of us as individuals could ever be better than all of us put together as a team and worked hard at building our strengths and synergies. That proved very critical for us in the end,” said Lau.

He also attributed their success to the guidance of economics and finance lecturer Yeo Tze Sheng.

Rana, meanwhile, said he was glad to be given the opportunity by Curtin Sarawak’s School of Business to represent the university and that the team managed to secure second place in a quiz ahead of over 30 other teams.

“It was perhaps my first time taking part in such a competition and a great learning experience. It was also a fun and unforgettable experience thanks to my wonderful teammates,” he added.

Lim also found it an unforgettable experience. She recounted that the team had fallen behind in scores after the first segment of the finals despite emerging as the team with the highest score in the semifinals, but managed to come back strongly and finish as runner ups in the end.

Lecturer-in-charge Yeo Tze Sheng remarked that he was proud to have led a team of such talented individuals.

“To be able to emerge runners-up in only our third time participating in the competition speaks volumes of the hard work and dedication put in by these students. I wish them all the best in their future and congratulate Curtin Sarawak for producing such fine individuals,“ he said.

Dr. Abey P. Philip, Head of the Economics and Finance Department of the School of Business, expressed pride in the students for raising the name of Curtin Sarawak and the School of Business in the academic arena by bagging the second prize in such a prestigious  national level competition.  For more information on Curtin Sarawak, visit its website at www.curtin.edu.my or e-mail enquiries@curtin.edu.my. 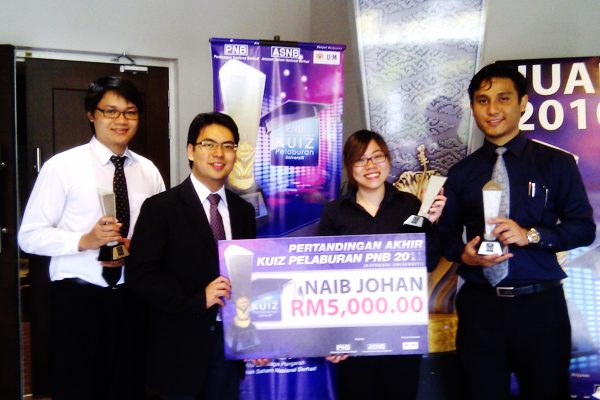