In her speech during the gathering, Professor Giridharan congratulated the soon-to-graduate students on their determination and hard work in their studies and thanked three alumni of the Faculty who were present for sharing their post-graduation journeys with the students.

Yiing, who graduated with a Bachelor of Engineering honours degree in Civil and Construction Engineering in 2009, shared how he underwent a three-month internship with Petra Energy, an integrated service provider for the upstream oil and gas industry, and joined as a graduate engineer upon graduation.

Currently an onshore field engineer with Sarawak Shell Berhad, he now has 10 years’ working experience in the oil and gas industry under his belt, assuming various roles ranging from offshore field engineer and maintenance engineer to HUC (hook-up and commissioning) engineer. In his current role, he heads Shell’s F6 site team and oversees major maintenance and hook-up projects.

Ting also graduated in 2009, with a Bachelor of Engineering first class honours degree in Chemical Engineering. She interned with Sarawak Shell’s Process Engineering Department for three months before graduation and is now a relief offshore installation manager (OIM) with the company, managing offshore assets at its facilities in the Central Luconia Field. She has also handled other roles previously, including process engineer, alarm management lead, operations reliability engineer, production programmer and maintenance supervisor.

Harleen, meanwhile, graduated with a Bachelor of Engineering honours degree in Mechanical Engineering in 2012, and before graduating, interned with Petronas MLNG’s Maintenance Department. Her first job was as a condition based maintenance (CBM) engineer with SVT Resources for two years and was involved in rotating equipment vibration analysis, thermography scanning and lube oil sampling at onshore plant and offshore platforms.

Harleen was then recruited into Sarawak Shell’s Shell Graduate Programme (SGP) as a trainee operation engineer and has since progressed to become a planning lead with the company’s business excellence team under its Project Management Office, a position she has held for the last four years.

In congratulating the three alumni on their outstanding success in industry, Professor Giridharan expressed hopes that alumni of the university will stay connected with their alma-mater by giving such talks to inspire current students, being guest lecturers, assisting in getting internships and job placements for current students and graduates in their companies, and becoming industry representatives on its faculty advisory panels.

The gathering also included a presentation on membership in the Board of Engineers of Malaysia (BEM) for the students and a tour of the Faculty of Engineering and Science building opened in 2016 for the three alumni.

The modern four-storey building completed at a cost of some RM20 million has brought together the administrative and teaching areas of the Faculty which were previously spread across two precincts of the campus. 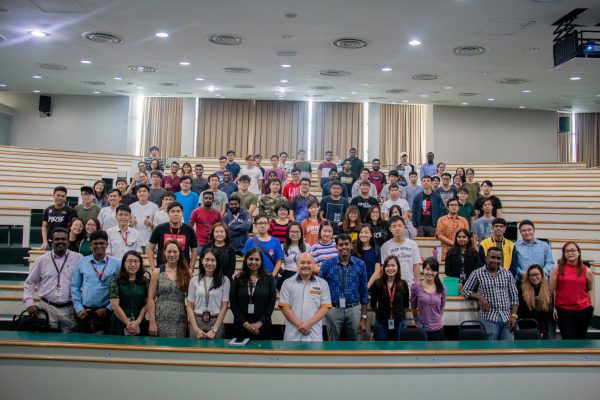 Group photo of students, staff and alumni during the gathering. 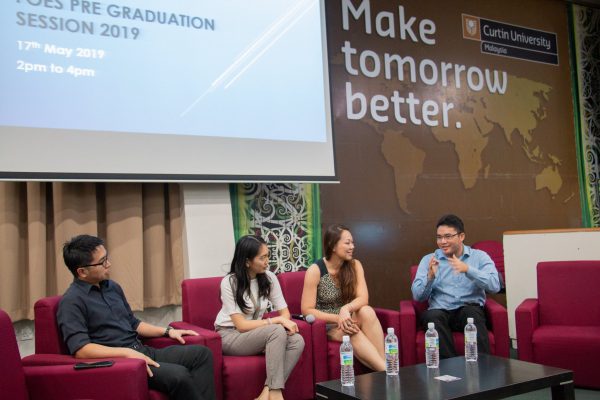