The MoUs, which were signed in an online ceremony, were with Universitas Tarumanagara (UNTAR) in Jakarta Barat, Indonesia, and Indore Institute of Science and Technology (IIST) in Indore, Madhya Pradesh, India.

The MoUs set the framework for collaboration in a wide range of educational and research activities, including exchange of students and faculty members for research, knowledge sharing, academic internships, exchange of academic materials and publications, and the organising of joint academic and scientific conferences.

In his speech delivered by Professor Lee, Professor Leunig commented that it was very apparent that UNTAR’s and IIST’s strengths in academia and research could be leveraged with Curtin Malaysia’s strengths as Curtin University’s largest global campus and education and research hub in Southeast Asia.

“Like your institutions, Curtin Malaysia is committed to innovation and excellence in teaching and research, engaging local communities and transforming lives through leadership, innovation and excellence. Our collective goal with these MoUs is to develop and offer higher education of the highest quality and jointly conduct research that address and solve real-world problem,” he said.

According to Professor Leunig, Curtin Malaysia is well-placed to be a formidable partner in such endeavours as it offers a wide range of Curtin courses that are ranked highly in the global subject rankings. Its engineering courses are double-accredited by Engineers Australia and the Board of Engineers Malaysia, and its Chemical Engineering course is triple-accredited with the inclusion of IChemE UK accreditation. Furthermore, its business courses are accredited by the Association to Advance Collegiate Schools of Business (AACSB) and various national and international professional bodies.

Professor Leunig also said Curtin recently achieved two significant milestones – entering the world’s top 200 universities in the QS World University Rankings 2022 and becoming one of only three Australian universities to achieve a QS Five Stars Plus rating – which are clear indicators of the university’s ability to harness its strengths as a global and innovative institution.

In his speech, Professor Ir. Augustinus remarked that the close ties and historical links between Malaysia and Indonesia was the basis of the partnership between UNTAR and Curtin Malaysia. Their closeness as neighbouring countries will allow the two universities to effectively implement collaborative offline and online academic programmes and joint research, he said.

He said was the MoU was timely as UNTAR, Indonesia’s second-highest ranked private university, seeks to expand its footprint in the region in line with the emergence of a more integrative and unprecedented age of cross-boundary global education.

“It is our goal to produce a whole new generation of graduates who are able to compete not just in Asia, but globally,” he said.

Dr. Keshav, meanwhile, said in his speech that IIST’s vision is to be a nationally recognised institution of excellence in technical education and is committed to producing competent graduates capable of making valuable contributions to society through holistic development, promoting critical thinking, project-orientated case-based learning, and developing practical skills required for industry.

The collaboration with Curtin Malaysia will help IIST achieve its goals by enhancing the education it provides and also provide opportunities for joint research, he added.

The signing ceremony was followed by online academic talks for over 200 academics, researchers and students from Curtin Malaysia, UNTAR and IIST. Professor Tuong-Thuy Vu gave a talk entitled ‘Understanding the World with Geospatial Intelligence’, followed by Shri Arun S. Bhatnagar who gave a talk on ‘Holistic Work-Life Management – Developing Value-Based Future Leaders’. Dr. Wahidin Wahab of UNTAR, meanwhile, delivered a talk on ‘Past and Present Research Activities in Robotics’. 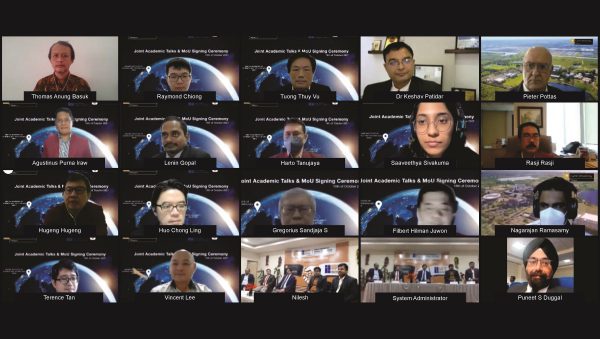 Screen grab of the attendees during the signing ceremony. 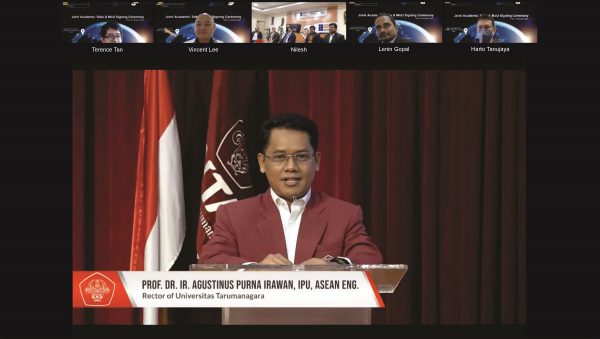 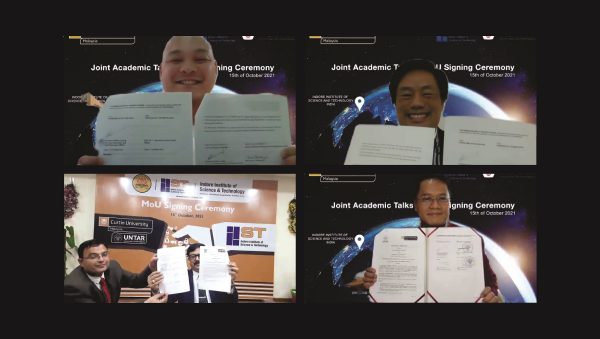 The signatories holding up their signed documents.