Members of the public, especially drone and radio control (RC) hobbyists, are invited to view showcases of different types of drones or quadcopters and other RC-related machines at the exhibition, as well as witness thrilling displays of drone racing by pilots from Sarawak, Sabah and Brunei during the drone race from 9 am to 3 pm at the university’s Frisbee field.

They will also get to the chance to try out some of the drones, including flying drones in first person view (FPV) and enjoying the sensation of flying in the air.

The opening of both events will be officiated by Pro-Chancellor of Curtin Malaysia, Datuk Patinggi Tan Sri Dr George Chan Hong Nam.

Drone racing is an emerging motorsport globally and also becoming increasingly popular here in Sarawak. The racing drones are equipped with cameras and the pilots wear headsets that stream a live camera feed directly from the drone in flight, thus allowing pilots a ‘first person view’ as if they are piloting the drone in the air.

The race will kick off with a racers’ practice session at about 10 am, followed by preliminary heats and a Free Style Contest in the morning, and the semi-finals and finals in the afternoon, before closing with a prize presentation and closing ceremony at approximately 2.30 pm. In addition, there will be ‘Fun-Fly’ sessions (free-to-fly sessions where everyone can fly their RC machines) between the events.

Tee added that the race was aimed at gathering drone racers from different places in Borneo and creating an opportunity for drone racers and drone enthusiasts to interact and share their drone experiences.

“The event will not only involve competition and interaction between drone racers and enthusiasts but also help promote the hobby to the local community, including students and staff at Curtin Malaysia,” remarked Tee.

Meanwhile, the exhibition, which will end at about 3 pm, will also feature an “Explore Curtin’ drone filming session where the public can observe an FPV aerial video of the university campus being filmed. 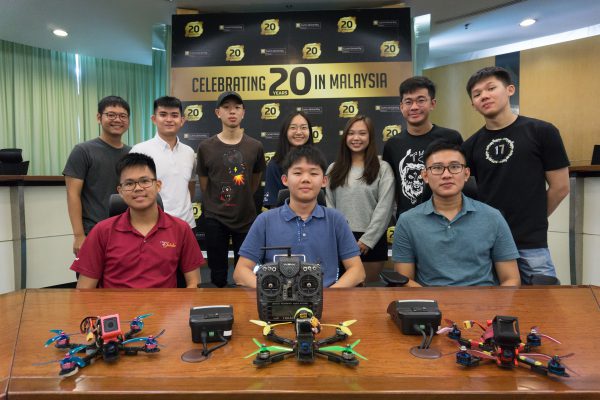 Members of the Curtin Drone Racing Club with some of their racing drones.