Miri – 14 December 2016 – Over 200 students and staff of Curtin University, Malaysia (Curtin Malaysia) gathered in the Harry Perkins Lecture Theatre at the university campus yesterday for a memorial service to remember two of its international students who perished in a tragic boating accident last Sunday.

Bachelor of Arts (Mass Communication) student Amate Mohamed Amate and Bachelor of Technology (Computer Systems & Networking) student Emine-imoh Daniel Udoh, both Nigerians and well-regarded students of the University, died when the boat they were in capsized in unexpected bad weather while out on the lake at Loagan Bunut National Park, about 2 hours drive from here.

They were on a privately-arranged visit to the national park with four other students of the University whilst on their year-end break when they decided to go out onto the lake with an experienced boat skipper to see some of the interesting wildlife around the lake. The other four students and boat charter staff managed to swim to safety and were rescued by local villagers.

Vice-Chancellor of Curtin University Professor Deborah Terry in her blog expressed deep sadness in the loss of the two students. She extended her sympathy to their families, their fellow students and staff at the Malaysia campus. Chancellor Colin Beckett also conveyed his condolences, as did other members of the senior executive at the Perth and Malaysia campuses.

During the service, Pro Vice-Chancellor, President and Chief Executive of Curtin Sarawak Professor Jim Mienczakowski said the entire campus community was shocked and deeply saddened by the tragedy.

“My heartfelt thoughts and prayers are with Amate, Daniel and their families at this time. May they find peace, comfort and strength in our prayers and our support,” he said.

Mienczakowski thanked staff of the University for working tirelessly since the tragedy, assisting the authorities in the search and rescue efforts, providing comfort and support to the surviving students, contacting the students’ families and making other necessary arrangements.

He also expressed his gratitude to the local authorities, hospital staff and religious officials for their efforts, and to students of the University for organising the memorial service.

One of the surviving students gave a moving eulogy for Amate and Daniel, saying they were long-time friends at the campus and being nature lovers and close to the local community, often went on excursions and participated in community outreach projects together.

This was followed by an outpouring of sympathy and sharing of experiences with the departed students by their fellow students and lecturers. They also left notes of condolences which will be sent to the victims’ families in Nigeria.

The service ended with messages and prayers by a Muslim ustaz and a Christian pastor, which brought one staff member to remark that it was the first time members of the two faiths were brought together for such an event.

“Despite the tragic circumstances, we have Amate and Daniel to thank for bringing us together for such a beautiful moment. They touched a lot of people here in Miri when they were alive and will be fondly remembered for a long, long time to come,” she said.

Amate, a Muslim, was buried at the Batu 1, Kuala Baram Muslim cemetery following rituals at the An-Naim Mosque in Lutong yesterday evening according to his family’s wishes. It was also attended by a large gathering of students and staff. The University is making final arrangements to send Daniel’s remains back to his home country and is helping the surviving students return to their hometowns to be with their families.

The University is also providing counselling services to students and staff affected by the tragedy at both its Malaysia and Perth campuses and continues to assist the authorities in their ongoing investigations. 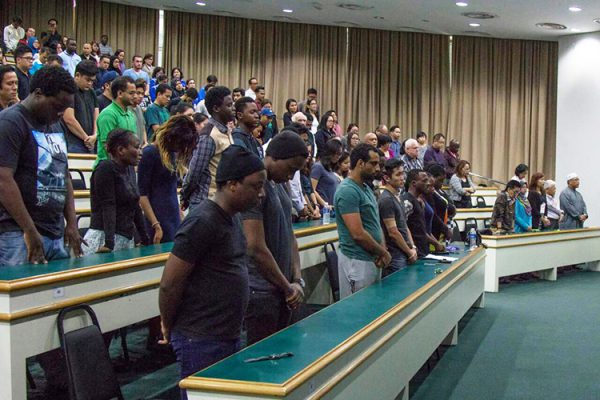 The large gathering of students and staff at the memorial service. 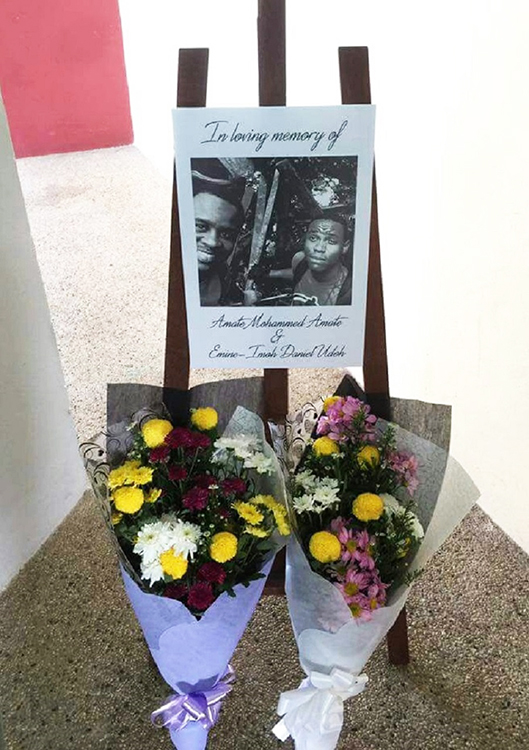