The event, which carried the theme ‘Prospectivity of Onshore Sarawak O&G Resources’, was also telecast live via Zoom to enable SPG from outside Miri to participate.

Dr. Ziad presented a paper on the geological attributes of Sarawak’s oil and gas prospects, highlighting the onshore hydrocarbon producing areas in the state, while Dr. Mahmood spoke about the challenges of onshore oil and gas exploration and production, particularly onshore Sarawak.

In addition to being experienced lecturers, both Dr. Ziad and Dr. Mahmood have had extensive work experience in the oil and gas industry internationally. Dr. Ziad is currently the Programme Coordinator for the Bachelor of Engineering in Petroleum Engineering at Curtin Malaysia.

SPG is now actively partnering with Curtin Malaysia and other oil and gas stakeholders to set up the Sarawak Oil and Gas Innovation Centre (SOGIC) in Miri. The establishment of SOGIC was one of seven resolutions presented by delegates at the inaugural Sarawak Oil & Gas Seminar and Exhibition 2019 (SOGSE 2019) held in Miri last year to Sarawak Chief Minister Datuk Patinggi Abang Haji Abdul Rahman Zohari Tun Datuk Abang Haji Openg.

The resolution called for the establishment of SOGIC by SPG, Serba Dinamik Holdings Bhd., DUBS Holdings Sdn. Bhd. and Curtin Malaysia to promote innovation initiatives that will underpin the future development of Sarawak’s oil and gas industry.

Meanwhile, during the AGM, the SPG members reaffirmed their commitment to the establishment of SOGIC, as well as to providing continued support and commitment towards assisting the Sarawak government in addressing and redressing all oil and gas issues related to Sarawak. 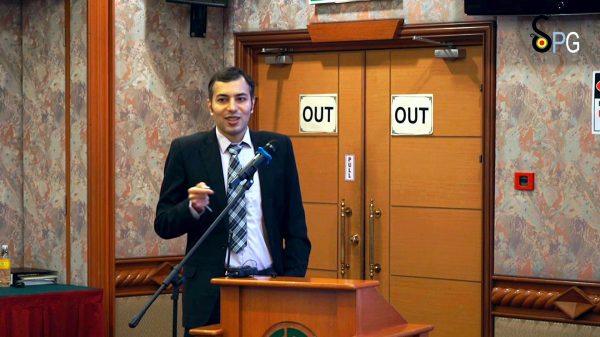 Dr Mahmood talking about the challenges of onshore oil and gas exploration and production.