Curtin Malaysia and Curtin University renew partnership for another 20 years

Miri – 20 December 2018 – Members of the senior leadership of Curtin University Malaysia (Curtin Malaysia) were in Perth recently to sign a new joint venture agreement (JVA) for a further 20 years of partnership with Curtin University in the lead-up to its 20th Anniversary in 2019.

The JVA acknowledges 20 years of strong partnership between the campus, established in 1999 as a joint venture with the Sarawak state government, and its Western Australia-based parent, which is now recognised as a global university with campuses in Western Australia, Malaysia, Singapore, Dubai and Mauritius and strategic partnerships with over 90 institutions across the world.

The new JVA also signals another 20 years of partnership in the continued development of the campus and enhancing Curtin Malaysia’s intellectual footprint and learning experiences for students, in building productive research collaboration, and in providing developmental opportunities for staff and students, under the mantle of Curtin’s ‘One University’ approach. Inevitably, Curtin Malaysia will play a greater role in helping Curtin achieve its global objectives.

Signing on behalf of Curtin Malaysia and the Sarawak state government was Chairman of the Board of Curtin (Malaysia) Sdn. Bhd., Datu Ose Murang.

Professor Terry remarked that the new JVA marks a significant milestone for Curtin University and affirms its commitment to providing high-quality education in Malaysia, in the strengthening of Australia-Malaysia ties, and the continued success of its campus in Malaysia.

Professor Terry added that Curtin’s ’50 Years of Innovation’ celebration in 2017 is now being followed by an equally exciting ’20 Years in Malaysia’ celebration next year.

“We are proud to celebrate this significant milestone as Curtin Malaysia has contributed hugely to Curtin’s success over the last 20 of those 50 years. We invite everyone to join us in celebrating the past and looking forward, as John Curtin said, to ‘the greater days to be’.”

Datu Ose commented that he was most delighted to be given the honour of signing a further 20-year JVA with Curtin University on behalf of Curtin Malaysia and the Sarawak state government.

“This new JVA records our successful partnership over the last 20 years and renews our commitment and dedication to leadership in providing world-class university education in Malaysia,” said Datu Ose.

He thanked Professor Terry and her team for their confidence in the partnership and acknowledged her sterling leadership in taking Curtin into the top ranks of universities worldwide in a very short span of time.

Datu Ose also expressed hopes that Sarawakian students would take full advantage of the opportunity to get a quality Australian education at Curtin Malaysia and gain a qualification that is recognised internationally.

On a similar note, Tan Sri Dr. Chan said that the support of local communities has always been, and will continue to be, crucial to Curtin Malaysia’s success. In return, Curtin Malaysia has ensured that the education that it provides is not only world-class but also affordable to local students. This includes offering scholarships to Sarawakian students for foundation and undergraduate study.

He added that Curtin Malaysia has contributed significantly to the economy of Miri, contributing some RM2.2 billion in terms of both direct and value-added impacts between 2005 and 2016 according to a regional economic impact study conducted by the university.

“Students in Sarawak have the opportunity to get a world-class education right at their doorstep. As we charge Malaysian fees for our courses which are identical to those in Australia, it is very affordable. With students from over 50 countries and teaching staff from more than 15 countries, they will also get a very international learning experience,” said Tan Sri Dr. Chan.

Datuk Lee, meanwhile, said the new JVA was an important milestone for Curtin Malaysia as it clearly demonstrated Curtin Malaysia’s capability to fulfill Curtin’s quality and standards and the excellent partnership both parties have enjoyed over the past 20 years.

He said Curtin Malaysia has always ensured quality and good standards and has been successful in producing graduates who are of the same calibre as those in Western Australia.

Datuk Lee added that in an Australian government assessment of Curtin University a few years ago, two of its 11 commendations cited Curtin Malaysia as setting the benchmark for Australian branch campuses. According to Datuk Lee, these factors have helped to raise the stature and reputation of Curtin as a leading global university.

“We in Curtin Malaysia are confident that we will attain greater heights in our pursuit for quality tertiary education. With 20 years of experience, we have the confidence, capability and tenacity to move forward in tandem with the main campus, not only in teaching but also in research,” said Datuk Lee.

Professor Mienczakowski said the signing of the new JVA is a stamp of approval from both sides recognising 20 years of outstanding achievement in establishing Curtin Malaysia and in building a high achieving international campus in Miri. It also signals another 20 years of even stronger partnership with Curtin University.

“It is a sign of our maturity as Curtin’s largest international campus and our role as its global hub in Asia. It further shows Curtin’s great confidence in our current operations and achievements and recognises our potential to continue climbing up the international rankings and further contribute to Sarawak, Malaysia, and international higher education and research,” he remarked.

He said that, as part of a university in the top one per cent in the world, Curtin Malaysia is clearly the leading world-ranked institution in Borneo by a significant margin across the vast majority of global metrics. Also, as Curtin’s oldest and largest international campus now entering its twentieth year, it represents Curtin’s firm commitment to education and development in Malaysia, and particularly in Sarawak.

According to Professor Mienczakowski, Curtin Malaysia is undergoing a new phase of strategic development over the next five years that focuses on expanding its role as Curtin’s global hub in Asia. It has over the last few years created more innovative learning spaces and incorporating technologies that facilitate bi-directional delivery of courses between the Perth and Miri campuses and support active student learning.

It has also launched an industry-standard radio studio for the teaching of its course in journalism, and embarked on the development of a Digital Centre for Excellence and live Stock Market Trading Room to further enhance its teaching facilities, and a new Engineering Research Laboratory equipped with the latest technologies in an expansion of its existing substantial engineering facilities.

This is in addition to investments in biotechnological research infrastructure by the Sarawak state government and Curtin at the soon-to-be-opened Pilot Plant Facility at the campus. The new research facility will create fresh opportunities for collaborative research and industry engagement to bring positive change to local communities.

“The new JVA will allow us to provide learning of a standard beyond excellence,“ he said. 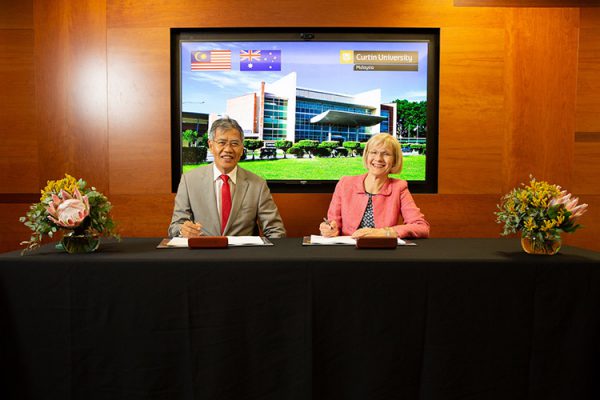 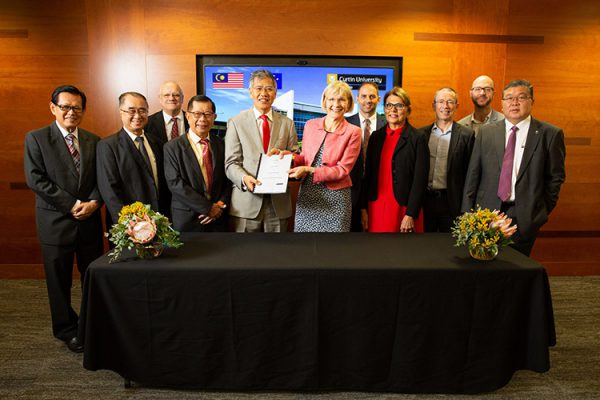 Datu Ose and Professor Terry exchange documents as the other university representatives look on.