You might be surprised to learn that there are hornbills resident in Miri. I’m talking about the birds – yes, real live ones in the ‘wild’, not in a zoo or a cage.

While some people travel around the world to see such iconic animals, we are lucky to have them right on our doorstep – well, almost on our doorstep. In fact, to be precise, hornbills nest only 8.6km from Curtin Sarawak’s campus.

So what’s so special about that? For a start, hornbills occupy a very special place in Sarawakian culture. The rhinoceros hornbill, with its distinctive curved orange red bill or casque, is featured on the Sarawak state crest. The ‘kenyalang’ feathers have cultural significance for the Ibans and other indigenous communities. Such feathers decorate some of their ceremonial dress, though today, they are wisely being replaced by more environmentally-friendly imitation feathers. Hornbill symbolism is also widely found in native art.

What’s more, we cannot help but marvel at the sight of these magnificent birds with their enormous and seemingly heavy bills. In the case of the helmeted hornbill, the bill is actually solid and was traditionally used for carving items such as earrings.

Other species have less dense, but no less impressive, bills. The species that lives near the Curtin Sarawak campus is the Oriental Pied Hornbill (Anthracoceros albirostris). The words ‘anthraco’ and ‘ceros’ come from the Greek words for coal and horn and refer to the black markings on the bill of this species.

‘Albi’ is from Latin and means to be or go white; ‘rostrum’ is a Latin word for a platform or beak. So, from the name itself, you can picture a hornbill that is essentially black and white – hence the common name “Pied”, which means to have two different colours.

Of the ten hornbill species found in Malaysia, the Oriental Pied Hornbill is one of the smaller ones of those more commonly found in coastal areas. However, only four individuals, all members of a single family, are currently known to inhabit the Piasau peninsula in Miri. These birds are so special that you can even follow them on Twitter (Piasau Yelping @PiasauYelp) – but watch out as these birds don’t tweet but yelp!  You can also find and like them on the Facebook group ‘Save Piasau Oriental Hornbill’.

By now you must be wondering what the fuss is all about and what this has got to do with Curtin Sarawak.

In 2012, a Casuarina tree on Piasau Camp was found to be home to an adult female hornbill and her two chicks. Hornbills are unlike other birds in that the female lays her eggs and incubates them in a hole in a tree. The entrance to the hole was sealed with clay by the adult male bird, leaving just a narrow open slit. It is through this slit that the father provided all the food needed by the mother and their growing chicks.

He visited the nest several times a day and regurgitated food items stored in his neck, popping them through the slit to the three hungry birds inside. During the several months long ‘confinement’ and feeding period, three beaks (one large and two small) could sometimes be seen poking their heads out of the slit. When the chicks were big and strong enough to fly, the father hornbill broke open the seal of clay so that they could take flight.

The family usually stays together, and the couple may return to the same nest for future breeding. Of course, for the birds to survive, the trees they nest in must be available, as well as the sources of food.

If anything happens to the father while the mother and chicks are still in the nest, all 4 birds would perish, not just one. If anything happens to their habitat, they will surely perish too. There is also the problem of maintaining a minimum viable community for reproduction.
Members of Malaysian Nature Society (MNS) Miri Branch, and in particular its chairperson,  Musa Musbah, have been keeping a keen eye on the activities of this hornbill family, which at present is the only one known in Miri.

MNS is already spreading the word through articles in newspapers. in addition to organising bird walks and bird talks, to increase the Miri community’s awareness to the plight of the hornbills. It is hoped that the environmental value of the hornbill habitat and other surrounding green zones in Miri will be recognised and damage to the habitat can be avoided.

Curtin Sarawak is lending its support to the ‘Save the Hornbills’ campaign and would also like to provide our students with a unique opportunity to get to know the animals and plants surrounding us. You’ll be hearing more about hornbills during the course of the year as a number of activities and events at Curtin Sarawak are already in the planning as part of the ‘Save the Hornbills’ campaign.

Meanwhile, if you would like to know more about the birds that live on our green campus, check out the following blog at miribirding.blogspot.com/2010/07/birds-on-campus-curtin-university-miri.

Dr. Dominique Dodge-Wan is a senior lecturer in the Department of Applied Geology, School of Engineering and Science, Curtin Sarawak. She teaches geological field mapping, sedimentology, stratigraphy as well as a number of other units, and is carrying out research on the Niah caves. She can be contacted at +60 85 443 939 or by e-mail to dominique@curtin.edu.my. 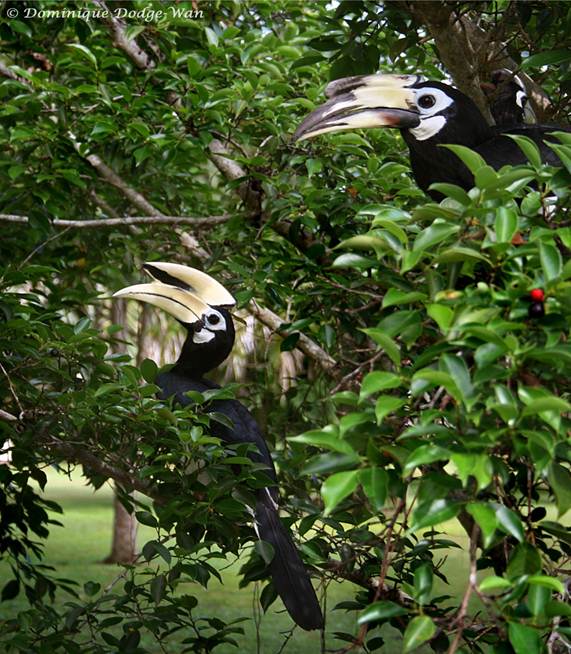 Fig. 1 Couple of Oriental Pied Hornbills with male (on the left with the upturned beak tip) and female (on the right) on Piasau Camp several years ago. Individual birds can be identified by the markings on their beaks, so we know that this is not the same couple as the one spotted recently.